Collins, Wilkie “The Woman in White” 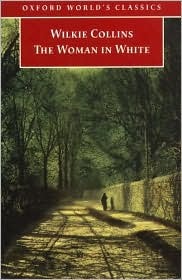 After having read "The Moonstone" (which I really liked), I just had to read this one. I wouldn't be able to tell which one I enjoyed more, they are both marvellous.

First, I enjoy Wilkie Collins telling the story in so many voices, having it told in an "I" version throughout and still giving us the best view of every scene. I like that about his stories. Definitely have to read another one.

Then, I also loved the story itself, the characters, they really came to life. I could just imagine the way they looked like. The description of both the characters as well as the countryside etc. was just great.

What a fabulous author!

From the back cover:
"'In one moment, every drop of blood in my body was brought to a stop... There, as if it had that moment sprung out of the earth, stood the figure of a solitary Woman, dressed from head to foot in white'
'The Woman in White' famously opens with Walter Hartright's eerie encounter on a moonlit London road. Engaged as a drawing master to the beautiful Laura Fairlie, Walter becomes embroiled in the sinister intrigues of Sir Percival Glyde and his 'charming' friend Count Fosco, who has a taste for white mice, vanilla bonbons, and poison. Pursuing questions of identity and insanity along the paths and corridors of English country houses and the madhouse, 'The Woman in White' is the first and most influential of the Victorian genre that combined Gothic horror with pyschological realism."

I have also read "Armadale" in the meantime and thoroughly enjoyed that one, as well.
Posted by Marianne at 21:44