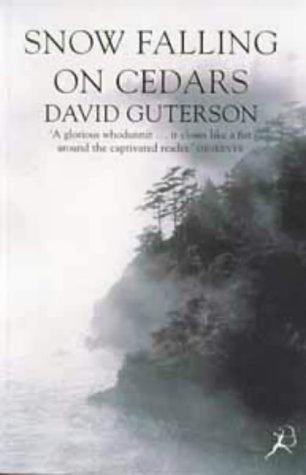 David Guterson's first book, not my first Guterson. I read "East of the Mountains" first and absolutely loved it. So I had to read this one which was his first big success.

What can I say? Absolutely brilliant. Growing up in Germany, you hear everything about World War II, well, everything the Germans did and everywhere the Germans went and everyone who came to Germany etc. You hardly ever hear about the Pacific part of the war. What did the Japanese do? We all heard about Pearl Harbor but that's about it. They never tell us about what happened to the Japanese people who lived in the States before the war started and who had absolutely nothing to do with the situation. Wow! What a tale. What an amazing account of a tragic part of history.

I have also read "Our Lady of the Forest" and "The Other" in which Guterson carries on to be a great author.

From the back cover:
"San Piedro Island in Puget Sound is a place so isolated that no-one who lives there can afford to make enemies. But in 1954 a local fisherman is found suspiciously drowned, and a Japanese-American named Kabuo Miyamoto is charged with his murder.

In the course of the ensuing trial, it becomes clear that what is at stake is more than one man's guilt. For on San Piedro, memory grows as thickly as cedar trees and the fields of ripe strawberries – memories of a charmed love affair between a white boy and a Japanese girl who grew up to become Kabuo's wife; memories of land desired, paid for, and lost. Above all, San Piedro is haunted by the memories of what happened to its Japanese residents during World War II, when an entire community was sent into exile while its neighbours watched.

Gripping, tragic, and densely atmospheric, 'Snow Falling On Cedars' is a masterpiece of suspense – but one that leaves us shaken and changed."
Posted by Marianne at 19:17