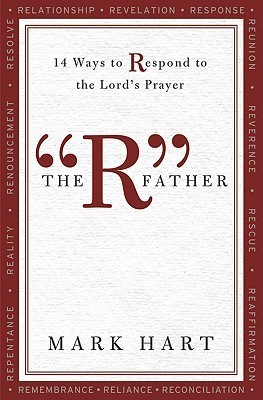 I read this with my church group. A very good approach to a prayer every Christian knows, the "Our Father" is probably the first prayer you learn. Mark Hart has a special way of describing every single line, sometimes every single word and puts a whole new meaning in this. Good read either for yourself or in a group.

From the back cover:
"How often do we view the Our Father only as a series of petitions rather than as a way to the heart of our heavenly Father? Popular Catholic author Mark Hart says that the prayer Jesus gave us is a reactionary prayerone that calls for a response from us. As he reflects on each of the words and phrases of the Our Father, he emphasizes the intimate relationship that God desires to have with us. Each of the fourteen ways Hart suggests for responding to the Lords Prayer begins with the letter Rfrom remembrance to repentance to reliance to resolve. This book will give readers a new appreciation for this profound yet simple prayer as well as a deeper understanding of the love that our Father pours out on us, his children. Informal and engaging style will appeal to both younger and older Catholics. Makes a thoughtful Confirmation gift."
Posted by Marianne at 15:47