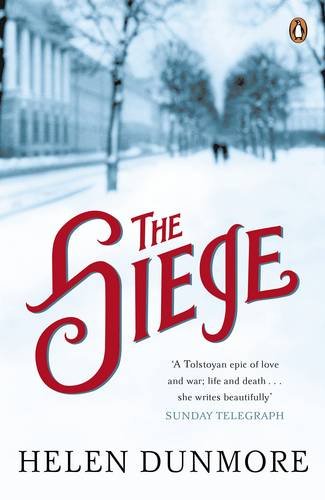 We are talking about the siege of Leningrad, lasting 872 days from September 1941 to January 1944. A young woman tries to get through this with her ageing father and little brother.

This is probably not going to be our favourite book this year. I love historical novels, so much to learn from, hadn't read anything about this topic, so thought that was going to be interesting. But - this book was kind of superficial. Although we liked the descriptions about Siberia and Helen Dunmore did a good job at describing the atmosphere, we thought the beginning was quite overdone, too many flowery descriptions were probably intended to give this book more depth than it had. Emotion, love or hatred, not a lot of that was shown. We agreed that situations like that show the best and the worst in people.

Then names turned up almost out of the blue and you were supposed to remember a name that was mentioned once a couple of hundred pages ago, there were just too many faceless characters.

We would have liked a little more about the history, not just a short glimpse at the start, another one during the siege when it's really hardest and then one when it is all over. How did they get saved? Not really a lot about that. Also, the book gives the impression that the siege lasted only one winter as opposed to almost three years.

We didn't think we'd be tempted to read another one of her novels, not even the sequel "The Betrayal", even though the characters were described well and also the situation but the whole story was a little too superficial.

"Leningrad, September 1941. German tanks surround the city, imprisoning those who live there. The besieged people of Leningrad face shells, starvation, and the Russian winter. Interweaving two love affairs in two generations, THE SIEGE draws us deep into the Levin's family struggle to stay alive during this terrible winter. It is a story about war and the wounds it inflicts on people's lives. It is also a lyrical and deeply moving celebration of love, life and survival."

We discussed this in our book club in November 2011.
Posted by Marianne at 18:51