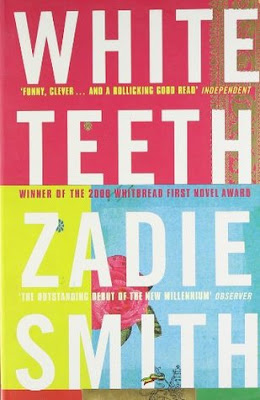 I read this book a couple of years ago with my Dutch book group. When I picked it up at the book shop, I thought I wouldn't enjoy it, it looked just like one of those "chick" books that are always the same and you know the end before it has even started. The colours just really threw me.

So, I was pleasantly surprised to find it was a great book with interesting plots, good descriptions, good language. She even was a "Whitbread" runner up. Since some of our members didn't like this one, they suggested we read the "winner" ("English Passengers" by Matthew Kneale). I remember not liking that one very much.

Anyway, "White Teeth" was good and they made a series out of it. Unfortunately, we had moved away from the UK at the time and I didn't get to see it. Anyone here who did?

"On New Year's morning, 1975, Archie Jones sits in his car on a London road and waits for the exhaust fumes to fill his Cavalier Musketeer station wagon. Archie - working-class, ordinary, a failed marriage under his belt - is calling it quits, the deciding factor being the flip of a 20-pence coin. When the owner of a nearby halal butcher shop (annoyed that Archie's car is blocking his delivery area) comes out and bangs on the window, he gives Archie another chance at life and sets in motion this richly imagined, uproariously funny novel.

Epic and intimate, hilarious and poignant, White Teeth is the story of two North London families - one headed by Archie, the other by Archie's best friend, a Muslim Bengali named Samad Iqbal. Pals since they served together in World War II, Archie and Samad are a decidedly unlikely pair. Plodding Archie is typical in every way until he marries Clara, a beautiful, toothless Jamaican woman half his age, and the couple have a daughter named Irie (the Jamaican word for "no problem"). Samad - devoutly Muslim, hopelessly 'foreign' - weds the feisty and always suspicious Alsana in a prearranged union. They have twin sons named Millat and Magid, one a pot-smoking punk-cum-militant Muslim and the other an insufferable science nerd. The riotous and tortured histories of the Joneses and the Iqbals are fundamentally intertwined, capturing an empire's worth of cultural identity, history, and hope.

Zadie Smith's dazzling first novel plays out its bounding, vibrant course in a Jamaican hair salon in North London, an Indian restaurant in Leicester Square, an Irish poolroom turned immigrant café, a liberal public school, a sleek science institute. A winning debut in every respect, White Teeth marks the arrival of a wondrously talented writer who takes on the big themes - faith, race, gender, history, and culture - and triumphs."

I also read Zadie Smith's novel "On Beauty".
Posted by Marianne at 16:21