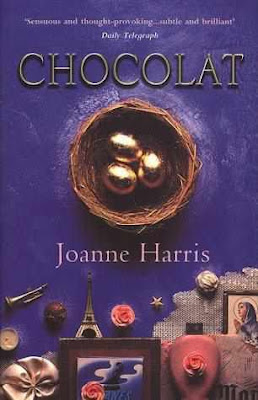 I read this book quite a while ago when everyone was raving about it. Actually, it was one of my former book club reads. I liked it all right but couldn't possibly think why everyone was just praising it so much. The story itself was not so absolutely new or interesting, the writing was alright but nothing of the ordinary. As I said, it was alright but that was it.

Then I happened to watch the movie. Don't remember why because usually I wouldn't necessarily watch a movie after I didn't like the book in the first place. But I watched it and I loved it. Probably due to the actors, they were all great. This is the only story I can think of where I liked the move better than the book.

"Chocolat begins with the arrival in a tiny French village of Vianne Rocher, a single mother with a young daughter, on Shrove Tuesday. As the inhabitants of Lansquenet-sous-Tannes clear away the remains of the carnival which heralds the beginning of Lent, Vianne moves with her daughter into a disused bakery facing the church, where Francis Reynaud, the young and opinionated curé of the parish, watches her arrival with disapproval and suspicion."

I also read "Five Quarters of the Orange", "Coastliners", and "Blackberry Wine".

Read more about her other books here.
Posted by Marianne at 19:34