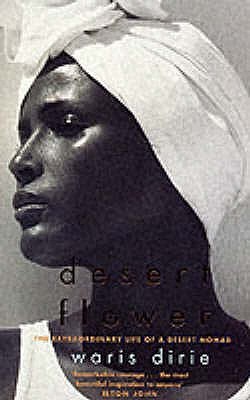 I remember hearing about female genital mutilation but I think this was the first time I read about it in detail. I think I was so shocked, couldn't believe that anyone would do such a thing ton an innocent young girl, the book has never left me. Not what you expect from the autobiography of a famous model.

Of course, Waris' story has sort of a happy end, she was discovered and lived the life of a glamorous model, even appeared in a Bond movie in the meantime. But what if she hadn't been clever enough to escape an arranged marriage and beautiful enough to be a model? We certainly wouldn't have heard about her tragic story, and there are millions of women around who suffer the same destiny.
I have read many books covering this subject since, i.a. "Infidel" and "Nomad" of her her fellow Somalian feminist Ayaan Hirsi Ali, or "Half the Sky" by Nicholas D. Kristof and Sheryl WuDunn. I admire anyone who fights for women all over the world.

From the back cover:
"Waris Dirie, whose name means desert flower, was born in Somalia of nomadic parents. She underwent extreme female circumcision at the age of five, and when she was 13 her father sold her into marriage with a 60-year-old for five camels, at which time she ran away. She was discovered by a fashion photographer in the United States whilst working as a janitor at McDonald's, and became a model who has been used to promote Revlon skin-care products. She also speaks on women's rights in Africa and travels the world to give lectures on behalf of the UN. This is her autobiography."
Posted by Marianne at 14:18