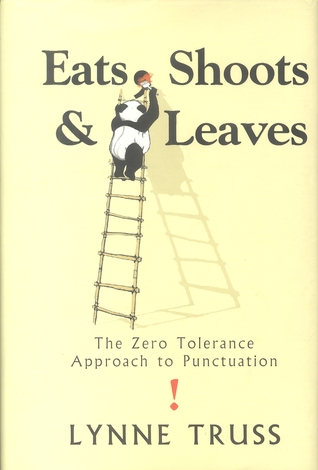 “A panda walked into a cafe. He ordered a sandwich, ate it, then pulled out a gun and shot the waiter. 'Why?' groaned the injured man. The panda shrugged, tossed him a badly punctuated wildlife manual and walked out. And sure enough, when the waiter consulted the book, he found an explanation. 'Panda,' ran the entry for his assailant. 'Large black and white mammal native to China. Eats, shoots and leaves.'”

I loved this book. If you live abroad, you will see wrong English signs everywhere. People who assume they speak English well enough will bring out posters etc., I have even seen T-shirts with mispronunciations. The apostrophe is a worldwide problem, they even introduced it into Dutch and German although we usually don't use apostrophes in those languages, at least not in the same way as in English. And yet, you see shop signs like Peter's etc. but - even worse - you see shop signs with apostrophes where it would be wrong in English, as well.

Another of my pet hates is the wrong use of English words in other languages. My favourite example: Did you know the "German" word for "mobile phone"? It's "handy".

I don't think this is a good book for those who do not know the use of the apostrophe, especially if you are an adult. If you haven't learned it by now, you obviously don't bother enough and will never learn it. It's a hilarious book for those people who do know the use of the apostrophe (and other parts of the English grammar that seems to be so difficult to learn for some) and see a mistake right away. It's hilarious. Read it!
From the back cover:

"We all know the basics of punctuation. Or do we? A look at most neighborhood signage tells a different story. Through sloppy usage and low standards on the Internet, in e-mail, and now text messages, we have made proper punctuation an endangered species.

In Eats, Shoots & Leaves, former editor Truss dares to say, in her delightfully urbane, witty, and very English way, that it is time to look at our commas and semicolons and see them as the wonderful and necessary things they are. This is a book for people who love punctuation and get upset when it is mishandled. From the invention of the question mark in the time of Charlemagne to George Orwell shunning the semicolon, this lively history makes a powerful case for the preservation of a system of printing conventions that is much too subtle to be mucked about with."

Lynne Truss has written another book, "Talk to the Hand".
Posted by Marianne at 11:11