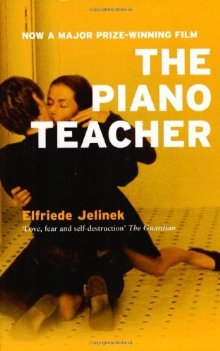 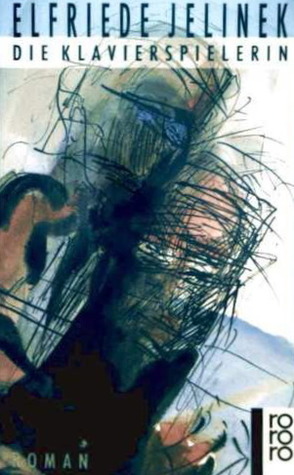 Elfriede Jelinek received the Nobel Prize for her "musical flow of voices .... "Granted, her language is extraordinary, I loved the way she describes thoughts, actions, objects.

This is a novel about a musician, her mother, her love life. The main subject of the novel is definitely the mother-daughter relationship. I only read afterwards that the novel has a very autobiographic background. I try to read as little about the background of a piece as possible, as often they give away the end and the whole joy of reading the book personally. I think this was good in this case.

I could have strangled the mother, for example, how you can imprison a child in your life, unbelievable. I didn't care much for the sexual desires of the piano player, her voyeuristic and masochistic escapades which turned the book into a bad pornographic piece, at least that's what I imagine bad pornographic pieces to be like, don't have a lot of experience with that kind of literature.

I love reading Nobel prize winners' novels, they usually are chosen for a good reason. Most of them, I couldn't wait to read the next piece. Will I want to read another book by Elfriede Jelinek? Probably not.

And don't forget, I read the original, no translator messed up my perception.

Into this emotional pressure-cooker bounds music student and ladies' man, Walter Klemmer. With Walter as her student, Erika spirals out of control, consumed by the ecstasy of self-destruction.

First published in 1983, The Piano Teacher is the masterpiece of Elfriede Jelinek, Austria's most famous writer. Now a feature film directed by Michael Haneke, The Piano Teacher won three major prizes at the Cannes 2001 Festival including best actor for Benoit Magimel and best actress for Isabelle Huppert."

Elfriede Jelinek received the Nobel Prize for Literature in 2004 "for her musical flow of voices and counter-voices in novels and plays that with extraordinary linguistic zeal reveal the absurdity of society's clichés and their subjugating power".

I contribute to this page: Read the Nobels and you can find all my blogs about Nobel Prize winning authors and their books here.
Posted by Marianne at 13:25