Six Degrees of Separation ~ From Wintering to Red Sorghum 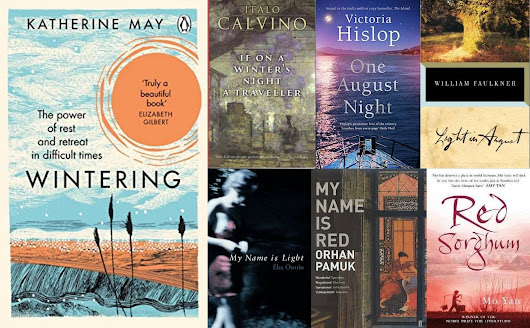 #6Degrees of Separation:
from Wintering to Red Sorghum

This month's prompt starts with Wintering (Goodreads) by Katherine May.

One August Night
Hislop, Victoria "One August Night" - 2019
I absolutely love Victoria Hislop. This is the sequel to her first book "The Island". Her novels are reat stories with a lot of information mainly about Greece.  This is about the end of the leper colony in Greece since they found a cure.
Historical Fiction

Light in August
Faulkner, William "Light in August" - 1932
This could be a follow-up tf "Gone With the Wind" seventy years later. A book about the Deep South, about country life, families, hard work, racism, crime, religion, morale, everything a story about this region and time should have.
Nobel Prize Winner

My Name is Light
Osorio, Elsa "My Name is Light" (E: A veinte años, Luz) - 1998
A deeply moving story about the struggles in Argentina not that long ago.
Amnesty International literary prize.

My Name is Red
Pamuk, Orhan "My Name is Red" (TR: Benim Adım Kırmızı) - 1998
My favourite book by one of my favourite authors. He writes in a quite unique style.
The narrator of the novel changes in every chapter which gives you an insight into the whole story that is beyond comparison. This novel doesn't just give you an insight into Islam and art, a tour around Istanbul and life 700 years ago, it is an expression of the quest for the meaning of life.
Nobel Prize Winner, Historical Fiction

Red Sorghum
Mo, Yan "Red Sorghum" (CHN: 红高粱家族 Hóng gāoliang jiāzú) - 1987
The story takes place during the second Sino-Japanese war between 1937 and 1945, the narrator tells the story of his ancestors, mainly that of his father, who was a teenager at the time, and his grandfather and grandmother. But it's not just about the war, we also get to know the way people used to live in the eastern part of China at the time.
Red Sorghum, the title of the book, means so much for the Chinese, it is not just food, it represents their country.
Nobel Prize Winner, Historical Fiction

I found some very good books this time, all of them favourites.