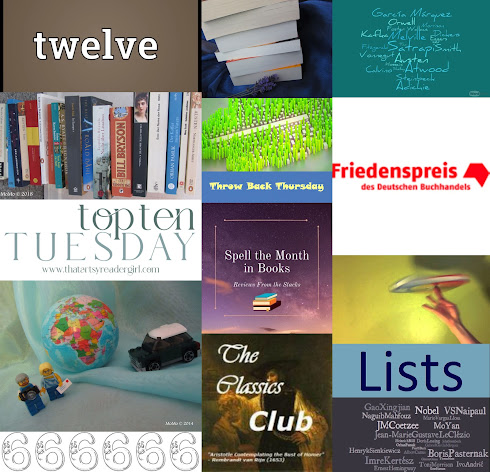 It's a special day today. At least for me. Twelve years ago, I started this blog.

Twelve is a good number. We have twelve months in the year and two times twelve hours in a day. We also have twelve signs in the zodiac, in the Western as well as in the Chinese one. In mathematics, it's a so-called composite number, the smallest number with exactly six divisors, its divisors being 1, 2, 3, 4, 6 and 12. In the British imperial and monetary system, everything was either divisible by twelve or by twenty (e.g. 12 inches in a foot). We even have an extra word for twelve in most languages: a dozen. In most religions, it has a very symbolical value (see 12 apostles, 12 sons of Abraham, 12 days of Christmas).

Last year, I presented you with the number of entries I had in certain genres and here is an update:
Classics (369 as opposed to 329 last year), Nobel Prize Winners (128), Lists (192), Book Club (225). And I have found many other things to blog about over the years, Book Quotes (353 quotes), Top Ten Tuesday once a week (141 weeks by now) and new challenges all the time, the Classics Club, Spell the Month in Books, Six Degrees of Separation, Read the Year, Travel the World Through Books etc. I haven't started any other new reading challenges this year because I really need to "work on" my TBR pile. However, I started to add books to my German blog here.