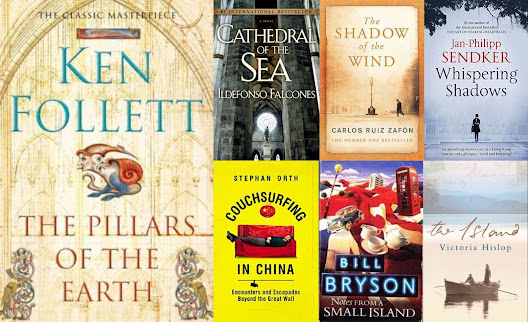 #6Degrees of Separation:
from The The Pillars of the Earth to The Island

#6Degrees is a monthly link-up hosted by Kate at Books Are My Favourite and Best. I love the idea. Thank you, Kate. See more about this challenge, its history, further books and how I found this here.

This month's prompt starts with the book we finished with last month, so in my case The Pillars of the Earth (Kingsbridge #1) - 1989 by Ken Follett

I was very pleased with this because I had another book in mind right away. They build a cathedral in "The Pillars of the Earth" and if you haven't read it, yet, I recommend you read the whole Kingsbridge series.

The cathedral in Ken Follett's story was built in the 12th century in England, Ildefonso Falcones describes one built in Barcelona in the 14th th century but they both have in common that they build a cathedral and that they show the lives of the builders and the rich people in those times. There is also a follow-up novel to this one but, unfortunately, hasn't been translated into English, yet,  I hope. Because it is just as great.

When I think Barcelona, I can't help but think about another favourite author of mine, Carlos Ruiz Zafón who wrote not about a cathedral but about books, a library and the time of the Spanish Civil War. He had this book follwed by three more books that can all be read in any order but give you a great story altogether.

I love reading about different countries and different times, especially if there are great sequels, as well, and the word "shadow" led me to another book by a German author who has written quite a few books about China after having worked there as an Asia correspondent. Both his fiction and non-fiction books are very informative.

Just as informative as the couchsurfing books by another German journalist who has travelled to quite a few countries that most of us will never be able to visit. But with his stories, it's almost as if we'd gone there ourselves.

Travel books always make me think about another favourite author: Bill Bryson. He has written so many great books about all sorts of countries, about language, about science etc. But this one is about his second home country where I also lived for a while and it still is my favourite book by him.

I will finish with another book about an island, one of my favourites by another favourite author. Victoria Hislop is a wonderful writer who has written such vivid and great books about Greece that they awarded her honorary citizenship. Well done, Victoria, and congratulations.

This was a fun challenge because we started with a book close to our hearts. I'm really looking forward to seeing what others came up with.