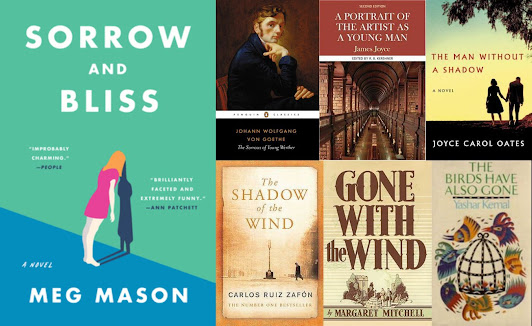 #6Degrees of Separation:
from Sorrow and Bliss to The Birds Have Also Gone

This month's prompt starts with Sorrow and Bliss (Goodreads) by Meg Mason.

When I saw the title of the starter book, I had to think immediately of an old German classic.

The Sorrows of Young Werter
Goethe, Johann Wolfgang von "The Sorrows of Young Werther" (GE: Die Leiden des Jungen Werther) - 1774
This epistolary novel is also slightly autobiographical. Goethe has always been a very important German author. This is probably one of his most famous books.
And then there is another famous classic author who has the word "young" in one of his titles:

The Man Without a Shadow
Oates, Joyce Carol "The Man Without a Shadow" - 2016
An interesting story about an interesting topic, like all of her novels. We get to learn the characters all so well, their thoughts, their hopes, their ambitions, their wishes for the future. Only, that for one of them in this novel there is no real future, it always ends after seven minutes. One of the two main characters suffers from amnesia, the other one is a scientist who studies his brain in particular and thereby hopes to find more insight into the human brain in general.
When I hear the word "shadow", I always have to think about another favourite writer who had to leave us far too early:

The Shadow of the Wind
Ruiz Zafón, Carlos "The Shadow of the Wind" (E: La sombra del viento - El cementerio de los libros olvidados #1) - 2001
This is one of the best books I ever found. It is intriguing, exciting, has all the parts a good book should have, an interesting story, a historical background, a description of a great city. And, most important, it's a book about a book, how someone can get involved in something after reading a story. This was my first book by Carlos Ruiz Zafón, I have read all of them in the meantime.
"Wind" is another word that appears often in titles. This is one of the books I have read and watched over various decades, again and again, first in the German translation, later in English. I still love it:

Gone With the Wind
Mitchell, Margaret "Gone With the Wind" - 1936
This book shows us all about the "life" of a war, the anticipation, how everyone wants this to happen for some reason or another, how they plunged into the fights and how they returned defeated and hopeless. This is what war does to any people. Back in the 19th century as well as today.
My last book takes us to Turkey with the word "gone":

Now, I am sure I could have found another title with "Birds" (like Birds Without Wings, Birdsong, ...) but this is SIX degrees of separation not seven or more.

As always, this was a fun list to do. I like both the way of going by words in the titles as well as by the subjects in the books. Since I hadn't read this one and "sorrow" offered itself, this is what I did last month. I'm looking forward to the other lists by other members.