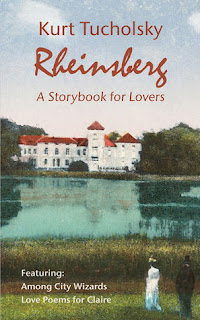 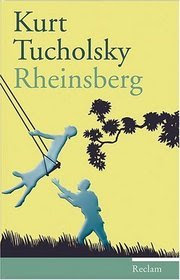 This is a lovely little story about a young couple in love, nothing less, nothing more. It was written in 1912, when nobody thought about war but young people tried to enjoy their lives. While it is not an autobiography, it carries snippets of the authors life. But he also criticizes the society at the beginning of the 20th century that showed the world an image of Kaiser Wilhelm's times.

The book was a scandal. An unmarried couple on holidays together for a weekend, pretending to be married, sharing a room. But it has been a favourite among German readers ever since, still more than a hundred years later. It was also turned into a nice little film in 1967 (see here).

This was Kurt Tucholsky's first success, he had many more, the most popular "Schloß Gripsholm", similar to this story but published later, in 1931. Then, he had to feat something worse than the outrage of prude readers, he was not only left wing, a pacifist, anti-military (especially after having to serve during WWI) and definitely anti-Nazi, he was also Jewish. He wrote with many different pseudonyms, e.g. Peter Panter, Theobald Tiger, Ignaz Wrobel but mostly Kaspar Hauser. Still, he fled to Sweden where he died of an overdose of his painkillers and there is a dispute whether this was intentional or accidental.

Kurt Tucholsky has given the world some lovely stories but, even more important, he has set an example that we shouldn't be quiet if we think something is not right. If there were more Tucholskys and fewer Nazis, the world would be a better place.

"One summer before World War I, a young couple escapes on a romantic weekend getaway to the small German town of Rheinsberg, north of Berlin, in the midst of a rural landscape filled with country houses and castles, cobble-stone streets, lush forests, and dreamy lakes. The story of Wolfie and Claire, told with a fresh, new style of ironic humor, became Kurt Tucholsky’s first literary success and the blueprint for love for an entire generation.

Kurt Tucholsky was a was a brilliant satirist, poet, storyteller, lyricist, pacifist, and Democrat; a fighter, lady’s man, one of the most famous journalists in Weimar Germany, and an early warner against the Nazis. Erich Kaestner called him a small, fat Berliner,' who 'wanted to stop a catastrophe with his typewriter'. When Tucholsky began to write, he had five voices - in the end, he had none. His books were burned and banned by the Nazis, who drove him out of his country. But he is not forgotten."
Posted by Marianne at 11:13