This week, our topic is Books I Wish Had an Epilogue

Honestly, there have been books where I wished for an epilogue but I made up my own version, so I don't want to dwell on that. And I hate sequels to books not written by the original author, so I never read them.

But here are some where I would love a good sequel (written by the author, of course): 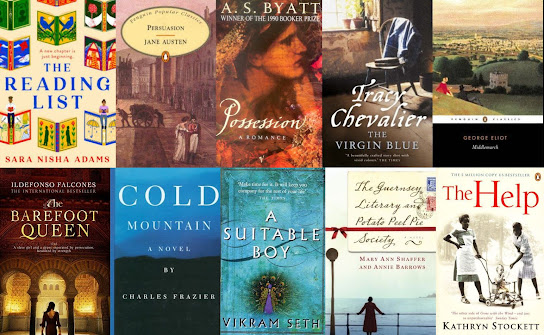 Adams, Sara Nisha "The Reading List" - 2021
Aleisha and Mukesh? Are they going to stay in touch? What about their family and friends?
Austen, Jane - "Persuasion" - 1817
What happens to Anne Elliot after she gets married? Will she accompany her husband on his sea voyages? Are they going to have children? I know Jane Austen has left ideas on how the lives of her different heroines will go on after the book ends but I would love to read a whole book about them.

Byatt, A.S. "Possession" - 1990
Roland Mitchell, Randolph Henry Ash, Maud Bailey, Christabel LaMotte, their lives are all interwoven across the centuries. What happens next after they make a big discovery?

Chevalier, Tracy "The Virgin Blue" - 1997
We know what happened to Isabelle du Moulin but what about Ella Turner?

Eliot, George "Middlemarch" - 1871-72
Is Dorothea Brooke happy with her new decision and her new life? I would think so but I'd like some details. Still, Ms Eliot isn't here anymore to write about that.

Falcones, Ildefonso "The Barefoot Queen" (E: La Reina Descalza) - 2013
Even though this novel takes place in the 18th century, I still wouldn't mind getting to know how the story of Caridad and the gypsies in Spain goes on.

Frazier, Charles "Cold Mountain" - 1997
What's the future of Inman and Ada Monroe? And what about Ruby Thewes? Their lives take place in such uncertain times, it would be nice to hear more about it.

Seth, Vikram "A Suitable Boy" - 1993
The author once promised (in 2009) a sequel. "A Suitable Girl", to take place in the present. Apparently, he is still working on it but has postponed publication again and again. Will we ever hear how the story goes on?

Shaffer, Mary Ann & Barrows, Annie "The Guernsey Literary & Potato Peel Society" - 2008
I know the book has a rounded ending and the author died even before publication but I would love to read about the Guernsey people after the war.

Stockett, Kathryn "The Help" - 2009
Skeeter, Aibileen, Minny, how does their life go on after the end of the novel.

I think we all have those books where we wish it would go on and we could accompany the protagonists a little longer. And I know my wish cannot be granted in a few cases because the author is no longer with us, unfortunately (Jane Austen, George Eliot, Mary Ann Shaffer). But the others are still around and might fulfill our dreams.

After all, a story goes on even after the last page of a book.