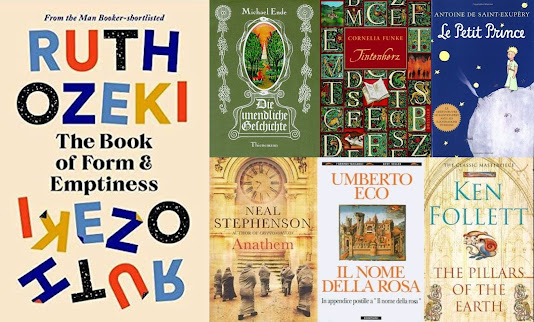 #6Degrees of Separation:
from The Book of Form & Emptiness to The Pillars of the Earth

This month's prompt starts with The Book of Form & Emptiness (Goodreads) by Ruth Ozeki.

I haven't read this book. Or heard of it. And first, I thought I'll go with the ideas I get from the title, a book about emptiness, for example. But then I read the description of the book:

"After the tragic death of his beloved musician father, fourteen-year-old Benny Oh begins to hear voices. The voices belong to the things in his house - a sneaker, a broken Christmas ornament, a piece of wilted lettuce. Although Benny doesn't understand what these things are saying, he can sense their emotional tone; some are pleasant, a gentle hum or coo, but others are snide, angry and full of pain. When his mother develops a hoarding problem, the voices grow more clamorous.

At first Benny tries to ignore them, but soon the voices follow him outside the house, onto the street and at school, driving him at last to seek refuge in the silence of a large public library, where objects are well-behaved and know to speak in whispers. There, Benny discovers a strange new world, where 'things happen'. He falls in love with a mesmerising street artist with a smug pet ferret, who uses the library as her performance space. He meets a homeless philosopher-poet, who encourages him to ask important questions and find his own voice amongst the many.

And he meets his very own Book - a talking thing - who narrates Benny's life and teaches him to listen to the things that truly matter.

With its blend of sympathetic characters, riveting plot and vibrant engagement with everything from jazz to climate change to our attachment to material possessions, The Book of Form and Emptiness is classic Ruth Ozeki - bold, wise, poignant, playful, humane and heartbreaking."

This made me thing about a book by a German author that has made it around the world. It's also about a boy who interacts with a book, he actually enters it in order to save a fictitious world with a princess in a tower.

Ende, Michael "The Never Ending Story" (GE: Die unendliche Geschichte) - 1979
This story reminded me of another German author who was very successful abroad and wrote a book where people come out of a book into the world of a little girl.

Funke, Cornelia "Inkheart" (GE: Tintenherz) - 2003
I was reminded of another little boy who lives in a world of his own.

Saint-Exupéry, Antoine "The Little Prince" (F: Le Petit Prince) - 1953
The first three books were all more or less children's books that take place in a fantasy world. There are few books that I read from that genre but here is one that I really enjoyed, taking place on a different (non-existing) planet.

Stephenson, Neal "Anathem" - 2008
The protagonists in this novel all live in a monastery kind of world and that made me think of one of the most famous books about the inhabitants of a monastery.

Eco, Umberto "The Name of the Rose" (I: Il Nome de la Rosa) - 1980
Coming to my final book, one of favourites, I think about it every time I hear about monasteries and cathedrals which I highly recommend, together with its sequels/prequels.

Follett, Ken "The Pillars of the Earth" (Kingsbridge #1) - 1989
So, I ended with a book that does describe a form, that of a cathedral. Whether there is emptiness inside, everyone must decide that for themselves.