This week, our topic is Hilarious Book Titles

I have done "Funny Book Titles" before. And "Books That Made Me Laugh Out Loud".

Since I don't read many books like that, I could either come up with the same titles as last year or start something completely new.

Whoever knows me, will guess correctly, I found a twist. I've listed a few humourous books written by women. Authors, comediennes, others. These are all funny books and luckily, most of them have written more than one book but I will include only one, either the first one they wrote or the first one I read. I hope you will find a few authors among them that you also like. 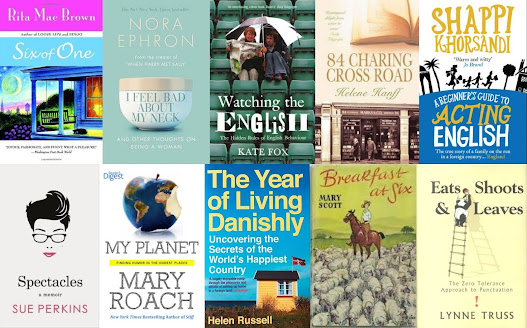 Ephron, Nora "I Feel Bad About My Neck And Other Thoughts on Being a Woman" - 2006 (short stories)

Russell, Helen "The Year of Living Danishly: My Twelve Months Unearthing the Secrets of the World's Happiest Country" - 2015

I hope you find a few books among them that you will also like.