I love so many different genres that I really had no idea where to start. So I thought I will begin at the beginning. My very first "adult" book was "Peony" by Pearl S. Buck. I have read many more books by her but it will always be one of my favourites. However, if you loved any of her books (and I only mention the most famous ones) or if you like to read about China, you will also love any of the other books on my list. 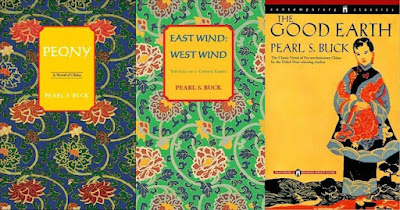 Buck, Pearl S. "Peony" - 1948
Nobel Prize 1938
Peony is a young servant (almost a slave) in a rich Chinese Jewish household. Her love to the son of the family cannot result in anything as traditional rules don't allow a marriage between them.

Buck, Pearl S. "East Wind: West Wind" - 1930
Pearl S. Buck explains the life in China during her lifetime like no one else, she explains the Chinese way almost in parables.
This work is about the divide between the East and the West, lots of explanations about the different kind of life in the two different continents.
The biggest subject of the novel is the custom of arranging marriages.

Buck, Pearl S. "The Good Earth" - 1931
The first volume in the "House of Earth Trilogy", the second one is "Sons", the third "A House Divided". The description of all sorts of people in pre-revolutionary China is really interesting. 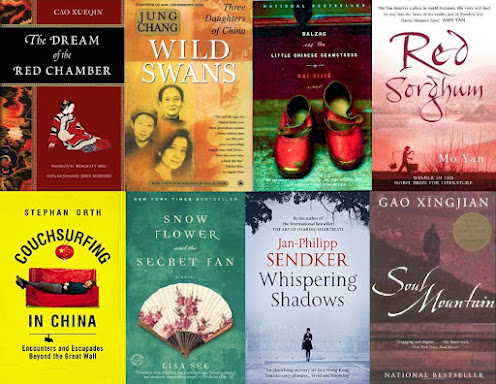 Cao, Xueqin "Dream of the Red Chamber/The Story of the Stone" (CHN: 红楼梦/Hung lou meng) - 1717-63
Apparently, this novel is "one of the four pinnacles of classical Chinese literature".
Also known as "The Story of the Stone", it is said to be the first Chinese novel of this kind and has created an entire field of study "Redology".
The novel has semi-autobiographical sides, it is said that it shows not just the rise and fall of the author's family but also that of the Qing Dynasty.
The book is one of the "101 Best Selling Books of All Time".

Chang, Jung "Wild Swans: Three Daughters of China" - 1991
Apparently, this is the biggest grossing non-fiction paperback in publishing history. The real story of a grandmother (who was born at the beginning of the last century, when girls in China still had their feet bound), mother and daughter, it really is a story of her family, the story of her people. The author manages to show what a lot of other fiction and non-fiction writers have not achieved, a true story of how people lived in Communist China.

Dai, Sijie "Balzac and the Little Chinese Seamstress" (F: Balzac et la Petite Tailleuse Chinoise) - 2002
A great story about the Chinese Cultural Revolution in its later years. Two boys from an educated family are sent to a village for re-education. Through the stories of Balzac (whose books they find and steal), they get to know and fall in love with a village girl who is known as the Little Seamstress.

Gao, Xingjian "Soul Mountain" (CHN: 灵山, língshān) - 1989
A biography, a search for someone's soul in a world where the individual means nothing. The author challenges you to try to understand his ways, his culture's ways. And by accompanying him on his search for Soul Mountain at the source of the You River, you can find a lot about yourself, as well.


Mo, Yan "Red Sorghum" (CHN: 红高粱家族  Hóng gāoliang jiāzú) - 1987
Nobel Prize 2012
The story takes place during the second Sino-Japanese war between 1937 and 1945. The narrator tells the story of his ancestors, mainly that of his father, who was a teenager at the time, and his grandfather and grandmother. As in most war stories, there is a lot of brutality in the book, the author has a very picturesque way of describing the atrocities committed by both parties. But he doesn't just talk about the war, we also get to know the way people used to live in the eastern part of China at the time.

Orth, Stephan "Couchsurfing in China: Encounters and Escapades Beyond the Great Wall" aka "High Tech and Hot Pot: Revealing Encounters Inside the Real China" (Couchsurfing in China. Durch die Wohnzimmer der neuen Supermacht) - 2019
Through the author's travels, we can take a little glimpse into the life of normal people in China. Although, most hosts are probably not completely representative, after all, they are very social and offer total strangers a roof over their head and a bed to sleep in, guide them through their city and talk about their lives, the average citizen probably doesn't do that in any country.
But that way, we read about giant cities that are bigger than the largest European cities that you had never heard of before.

See, Lisa "Snow Flower and the Secret Fan" - 2005
Lily and her friend Snow Flower are destined to be "laotong" (according to their horoscope), we would probably say BFFs (best friends forever) today. She tells us all about her life in her native family, her married family, her friendship with Snow Flower, her life during the Taiping Rebellion, her roles as daughter, wife, mother, friend.

Sendker, Jan-Philipp "Whispering Shadows" (The Rising Dragon #1) (GE: Das Flüstern der Schatten) - 2007
This novel by German journalist Jan-Philipp Sendker is the first in "The Rising Dragon trilogy". It gives an insight into today's China of which we still know far too little. The author reports about the grief of a man who has lost his son. And he talks about the slow healing after a heavy blow.
The book is both philosophic and informative.

Can you add any other books that fit into this category?