This week's topic is Bookish Memories
(Share stories of your reading life as a child, events you’ve gone to, books that made an impression on you, noteworthy experiences with books, authors you’ve met, etc. Reminisce with me!)

We had a somewhat similar topic last year in the Classics Club: The Classic Meme 2.0 - Classics we read as a child. But since this is about any kind of bookish memories, I didn't include all of those in here.

I remember being able to read a little before I started school. Letters always fascinated me. I belonged to one of the first students in our state that were not taught reading letter by letter but with words. My first sentence was "Da ist Heiner". (There is Heiner.) Unfortunately, I couldn't find a picture of the books that introduced me to my biggest adventure in life. It's been a while, I started school in the sixties. (So, if anyone can ever tell me what the title of this was, please let me know, I'll be eternally grateful.)

My first memory of a book I owned was when I was seven. I had just had my appendix removed and my parents brought me "Heidi". I still have that copy today (with the cover from the picture).

Of course, we had to read a lot of books in school and I was happy about that. One of my favourites was "Pole Poppenspäler" (Paul the Puppeteer) but I also loved the following:

The next memories are my school library and our little church library in the village. I borrowed any book I could get but I especially remember this one because it was one of the first "adult books" I read and I read all the books by Mary Scott that I could get a hold of afterwards.

And then I found Pearl S. Buck and with her my love for China and the whole wide world. This was my first one: 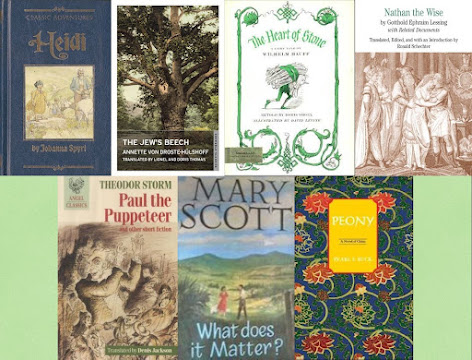 And then there are the books I read with my children, all of them bringing back wonderful memories. I only mention the series they loved so much, not all the individual books, most of them can be seen on my list of children's books. 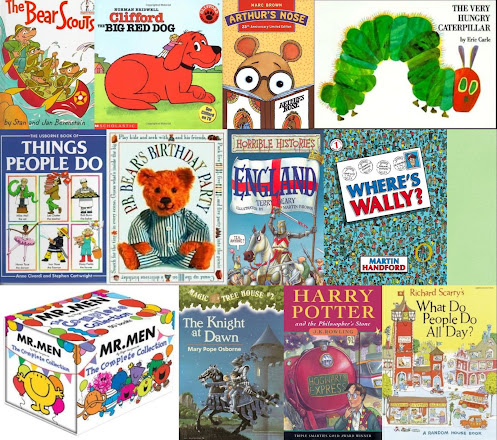 But where would we be without the alphabet? We coulnd't read anything if it wasn't there. And I've always been very interested in that.

I learned several types of spelling/writing. First, it was the Sütterlin script, a German alphabet developed from the old German Kurrent, also known as cursive or German script. It was easier to write with the new pointed nibs than the old style. Sütterlin was taught in German schools from 1915 to 1941, so when my parents went there. Because it was still very current when I went to school in the sixties, my mother taught me how to read and write it. My parents always said it was weird how Hitler had always insisted on everything being "German" yet he had forbidden the German script and introduced the Latin one in Germany. Yes, he was an idiot and didn't even follow his own ideas properly.

The next alphabet I learned was Bulgarian. I went there for an Esperanto congress in 1978 and I have always tried to learn a little about a language, wherever I go. I usually can say Hello and Goodbye, Please and Thank You. At least. And read the letters. Well, I haven't been to East Asia. Anyway, Bulgaria uses the Cyrillic alphabet, actually, it was the first country who did this. And since there are only a few letters that differ from the Russian alphabet, I can read that, as well. Doesn't mean I understand it, I read it just the way as I would read Finnish or Hungarian, I recognize the letters but not the words.

Then there was Hebrew and Arabic which I dipped into during our participation in an Esperanto congress in Israel in 1986. I can still recognize the letters and read a few words.

And, last but not least, I learned some of the letters in school, not in a language class but I am sure you all did learn the same letters as I did. I'm talking about the Greek alphabet. While we use alpha and omega also in church, we do use at least the first four or five letters in mathematics to define angles. And then there are the letters you hear in US high school and college movies. Their fraternities and sororities usually have three letters to choose from: Delta-Kappa-Nu, Lambda-Sigma-Phi … whatever. I went to Greece with my son's year group in 2005 and, as with all the other spellings, I went and extended my knowledge of their alphabet before going and therefore could practise it while there. 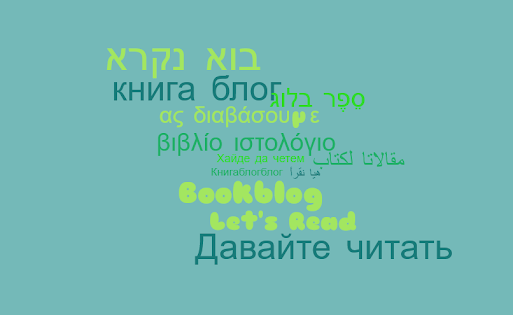 Word cloud made with WordItOut

I have put together the title of my blog and the word "bookblog" in those alphabets. Unfortunately, most pages don't recognize the Sütterlin script, so here is another picture with their alphabet.

And what are your memories of being introduced to reading?
Posted by Marianne at 11:18