So, I've chosen a few books that I lent out lately and some that everyone in our book clubs loved and hope there is something there for the people who think they don't like to read. 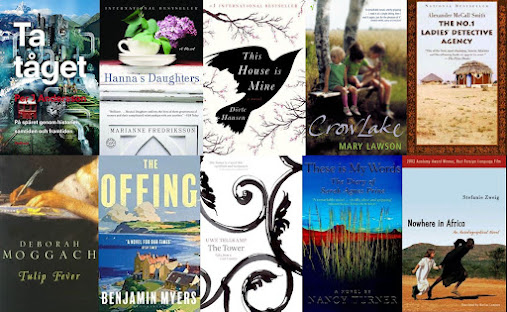 Andersson, Per J. "From the Swede who took the train and saw the world with different eyes" (aka: Take the train: on the track through history, present and future) (Swedish: Ta tåget: på spåret genom historien, samtiden och framtiden) - 2019
A description of the author's time in the train in order to get to the places rather than about the places itself.

Fredriksson, Marianne "Hanna’s Daughters" (Swedish: Anna, Hanna og Johanna) - 1994
A remarkable story about the life of women and how it changed during the last century. The story is situated in Sweden but it could have happened anywhere in Europe.

Hansen, Dörte "This House is Mine" (German: Altes Land) - 2015
A great description of some women who try to find their way in this world, starting with the mother who has to flee East Prussia after WWII, the daughter who will always be the foreigner in the new part of Germany they start to live in, a granddaughter who tries to find her roots.

Lawson, Mary "Crow Lake" - 2002
This is the story of a girl who is raised by her two older brothers and it describes the struggle they go through on their way to adulthood. The book combines everything, tragedy, drama, love story, sacrifices, the "togetherness" of a small community. The characters are well written, and so are the episodes.

McCall Smith, Alexander "The No. 1 Ladies’ Detective Agency" Series - 1999ff.
I have read all the Ladies’ Detective stories and liked them a lot (obviously, otherwise I wouldn’t have carried on). They are light stories, easy reads but quite amusing, not the usual "easy reads" with nothing memorable in it.

Myers, Benjamin "The Offing" - 2019
Robert is only sixteen years old. He is to follow his dad as a coal miner, like every other young boy in his village in Durham in the Northern part of England. World War II has just ended and Robert wants to see a little from the world. Last year's "Favourite Book of the Independents".

Moggach, Deborah "Tulip Fever" - 1999
Amsterdam, 1630. Wealthy merchants. Famous painters. Love and Betrayal. Rise and Fall. A lot of subjects in a book that really has only one major topic: Tulips. An easy read but informative and entertaining.

Tellkamp, Uwe "The Tower" (German: Der Turm. Geschichte aus einem versunkenen Land) - 2008
A description of life in East Germany in the 1980s. I grew up in the Western part of the country and - as most of us - didn’t have any contacts to the East. So, this was very informative, yet still quite entertaining.

Turner, Nancy E. "These is my Words, The Diary of Sarah Agnes Prine, 1881-1901" - 1999
The story is based on the life of the author's grandmother, a courageous and clever woman, who taught herself to read as a teenager and was a pretty independent woman.

Zweig, Stefanie "Nowhere in Africa" and "Somewhere in Germany" (German: "Nirgendwo in Afrika" and "Irgendwo in Deutschland") 1995+1996
This is an almost-autobiography of author Stefanie Zweig. Together with her family, she moves from Germany to Kenya in 1938 when she is 9 years old. The Jewish family have to flee from the Nazis.

Of course, it's hard to get the taste of someone who doesn't read but these are all books I have lent to friends at various times when they indicated an interest in the subject. So, hopefully, there is something that will wake up some non-readers.