Top Ten Tuesday ~ Books with Readers on Their Covers

I post some quotes every week (see here) and have a large collection of quotations from books that include memorable things characters have said. Therefore, the topic didn't really "speak" to me and I did a twist on the topic.

How do we get to know what characters have said? Right, by reading. So, I have chosen twelve books (still TTT) with covers of readers. 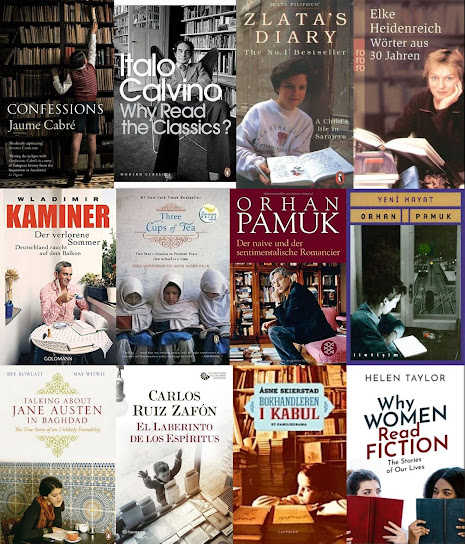 Rowlatt, Bee & Witwit, May "Talking About Jane Austen in Baghdad. The True Story of an Unlikely Friendship" - 2010

Taylor, Helen "Why Women Read Fiction. The Stories of Our Lives" - 2019

As you can see, they are either not written in English or written about non-English people. That wasn't my intention and I wonder whether it means something.

I hope to have inspired one or the other of you to read one of these books. Orhan Pamuk and Carlos Ruiz Zafón are some of my favourite authors.