Week 4 (November 22-26): Stranger Than Fiction
with Christopher at Plucked from the Stacks

This week we’re focusing on all the great nonfiction books that almost don’t seem real. A sports biography involving overcoming massive obstacles, a profile on a bizarre scam, a look into the natural wonders in our world - basically, if it makes your jaw drop, you can highlight it for this week’s topic.

I love reading history books. Or books about today's world but in a different culture/situation. Many of them sound more than surreal, so I've picked some that will defintiley fit this topic because I have not lived in such a world and hopefully never will. 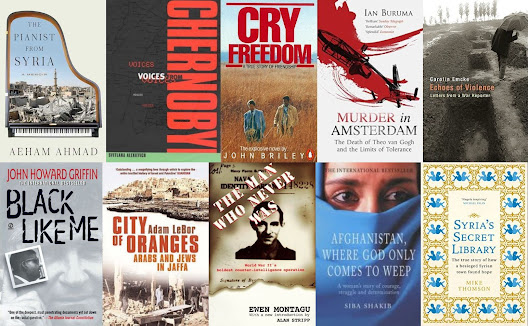 Ahmad, Aeham "The Pianist from Syria" (aka The Pianist of Yarmouk) (GE: Und die Vögel werden singen. Ich, der Pianist aus den Trümmern) - 2017
What a tragic, what a sad story. The author grew up as the son of Palestinian refugees in Syria who were gathered together in a part of Damascus, Yarmouk Camp, that was extremely hard if not impossible to leave.

Alexijewitsch, Swetlana "Voices from Chernobyl: The Oral History of a Nuclear Disaster" (RUS: Чернобыльская молитва/Černobylskaja molitva) - 2016
A very powerful story that everyone should read, especially those who still think that nuclear power is the "cheapest" and "best" form of energy.

Briley, John "Cry Freedom: The Legendary True Story of Steve Biko and the Friendship that Defied Apartheid" - 1987
An interesting story about a man who tried to claim freedom for his people, equal treatment, no matter the colour of your skin, the end of apartheid. He wanted all that peacefully and paid the ultimate price.

Buruma, Ian "Murder in Amsterdam: The Death of Theo Van Gogh and the Limits of Tolerance" (NL: Dood van en gezonde roker) - 2006
The murder of a director, a public figure. Why? He made a movie not everyone agreed with. He made a movie about the Muslim faith.

Emcke, Carolin "Echoes of Violence: Letters from a War Reporter" (GE: Von den Kriegen. Briefe an Freund) - 2004
A brilliant account of what war can do to a people. If we didn't know it before, we should certainly learn it from this book. War is stupid! War is terrible! War should not be allowed! For any reason. Put the leaders in one room and let them fight about their problems themselves.

Griffin, John Howard "Black like me" - 1961
The author takes some medication that alters his skin colour and disguises as a black guy in the late 50s in the Deep South of the United States. The courage it takes to do this and keep on going, amazing.

LeBor, Adam "City of Oranges. An Intimate History of Arabs and Jews in Jaffa" - 2006
A description of every different ethnic people living in Israel with a deep understanding for their problems.

Montagu, Ewen "The Man Who Never Was. World War II's Boldest Counterintelligence Operation" - 1953
The British plan to make the Nazis believe they wanted to invade anything but Sicily.

Shakib, Siba "Afghanistan, Where God Only Comes to Weep" (GE: Nach Afghanistan kommt Gott nur noch zum Weinen) - 2002
An account of the struggles and problems women have to go through, not only in Afghanistan but anywhere in the poorer part of the world where war and/or disaster strucks.

Thomson, Mike "Syria's Secret Library: The True Story of How a Besieged Syrian Town Found Hope" - 2018
In the midst of one of the worst civil wars probably in history, some young men don't just think about themselves but build a library in order to feed their souls and learn for the future "when all this is over".