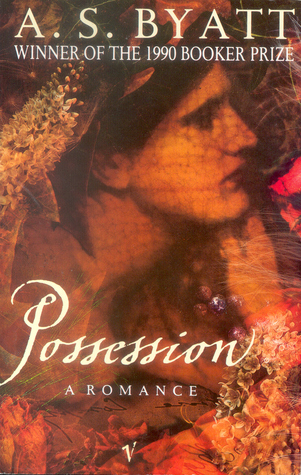 I have read this book three times and my paperback is falling to pieces. So I have decided that I need another copy - something I hardly ever do.

Anyway, Possession is a great book. I love it. There are two stories playing at the same time. Roland Mitchell, an American researcher at a London university, tries to find information about the fictitious Victorian poet Randolph Henry Ash. This leads him to Maud Bailey, a professor at Lincoln University who is an expert on another fictitious Victorian poet, Christabel LaMotte. While they discover a common past of the two poets and unfold a mystery, their lives begin to take on a turn parallel to that of the two poets.

The different chapters always start with a poem written by one of the two poets. When I read the book for the first time, I just left them out, I'm not a big poetry lover. However, when I read it again, I concentrated on them because they add a lot to the story.

I love classic novels and although this isn't one, it reads like one. Plus there is the time the two poets lived in that gives you the feeling of being in a classic book. Did I say I love it?

There is also a movie starring Gwyneth Paltrow and Aaron Eckhart as the contemporary and Jennifer Ehle and Jeremy Northam as the Victorian characters, I am often disappointed about movies made of my favourite books but this one is just as interesting as the novel.

I have read this book about half a dozen times and my paperback is falling to pieces. So I have decided that I need another copy - something I hardly ever do.

From the back cover:
"Possession is an exhilarating novel of wit and romance, at once a literary detective novel and a triumphant love story. It is the tale of a pair of young scholars investigating the lives of two Victorian poets. Following a trail of letters, journals and poems they uncover a web of passion, deceit and tragedy, and their quest becomes a battle against time."

In the meantime, I have also read "Ragnarok. The End of the Gods" by A.S. Byatt. I did not enjoy it as much as this one.
Posted by Marianne at 15:12